The Top Things Pirates Actually did for Fun 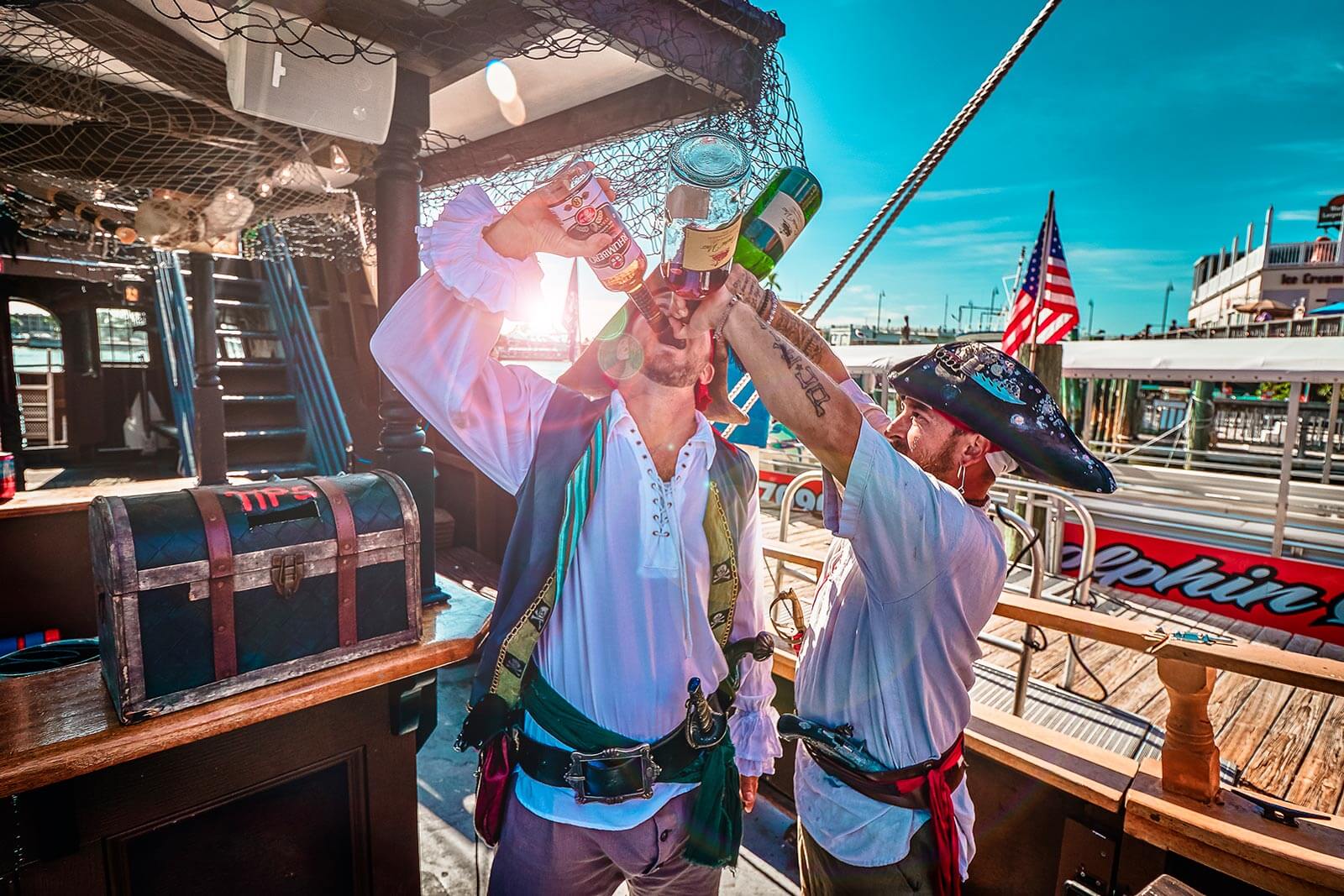 While our pirate excursions are packed with fun for the whole family, the fun selection of activities raises an important question: What did pirates actually do for entertainment aboard their ships? Sure, a lot of time was taken up with sailing and stealing, general pirate things. But what did pirates do during the downtime?

It turns out that pirates weren’t quite as violent as our movies like to suggest – there wasn’t much walking the plank or mocking prisoners. But they did have ways to pass the time at sea, and some entertainment that you might not expect! Here’s what pirates did for fun.

Of course, pirates needed to decide who gets the spoils after the raiding is done. But how did that work? The most successful pirates ships throughout history were surprisingly democratic: The ships were managed by competent officers, and the booty was equally divided so that everyone felt they were being compensated properly – otherwise, why be a pirate at all? And while captains may have taken a larger portion for themselves, they certainly weren’t greedy when it came to sharing wealth: In fact, pirates were often treated better than they would have been working for a merchant or military ship. That means one of the most fun activities aboard a pirate ship was counting out the booty for everyone.

While pirates didn’t have our modern board game options, they had dice, coins, cards, chips, and a lot of imagination. As a result, pirates made up and modified a wide array of various board games to amuse themselves, playing with all kinds of complex rules and interesting ideas. Many of these games were gambling, played for profit, but many were also just done for fun.

The legends of sea shanties weren’t made up at all! Pirates were famous for creating and singing songs as they sailed. Captains often encouraged this, because it kept morale up and helped the sailors focus on their work. If some of the pirates could play instruments, that was great, but pirates were generally too busy (and too outcast) to learn how to play instruments. Therefore, some pirate ships hired musicians or stole musicians from other ships – many of which would eventually be returned for a ransom, but not until the pirates had heard some music first.

Oh, and if the pirates weren’t busy while they were singing, they’d often dance, too! Pirates had nothing against dancing, and it was a way to stay active aboard a cramped ship while having fun. Many pirates even perfected their own personal dances.

Are you really that surprised? But there’s actually a very good reason that pirates drank – besides the obvious partying. You see, while pirates did sometimes find gold and coins when they took their booty, more common winnings included provisions and supplies, and generally nothing was considered more valuable than various types of alcohol. While pirates tried to sell most of these spoils, they also ended up drinking some of the profits, because…well, they were pirates.

But if you think that pirates drinking turned into raucous parties and fights, think again. Pirate ships were usually very well run, with strict laws against stealing and fights – especially when drinking was involved.

Pirates often came from all different kinds of social levels, representing a wide range of education (or no education at all). But the best pirate crews were the smartest and most learned, so it became quite common for more educated pirates to spend their downtime teaching others new skills. A pirate who was able to read, for example, might have spent his time teaching illiterate pirates how to read or write.

Pirate ships usually spent a lot of time waiting along popular shipping lanes for prey. As a result, long periods passed where pirates didn’t have much to do, at least until the wind changed. It’s no surprise, then, that one of their favorite pastimes was napping! On many ships, there wasn’t really room for bunks below deck (which was largely used for storage), so most pirates napped in their hammocks above.

Pirate food needed to last for a very long time without going bad, which didn’t leave them many options – and most of it didn’t taste very good, either. To eat healthier and have better food, many pirates kept livestock aboard, tending pens of chickens and other animals for milk and eggs (and, in time, meat). This livestock often became pets to the pirate crew, which enjoyed feeding and looking after their animals as a way to pass the time.

Pirates needed to keep their skills sharp, and if they had extra ammunition then practice was one of the common ways to have fun! For basic arms practice, they could set up targets on the ship and shoot. However, if they had the time pirates would pull out the big guns, their cannons: They would let drift a target in the water – anything that could float would usually do – and practice aiming and firing their cannons so they would be able to sight distances and quickly fire when a real battle came along.