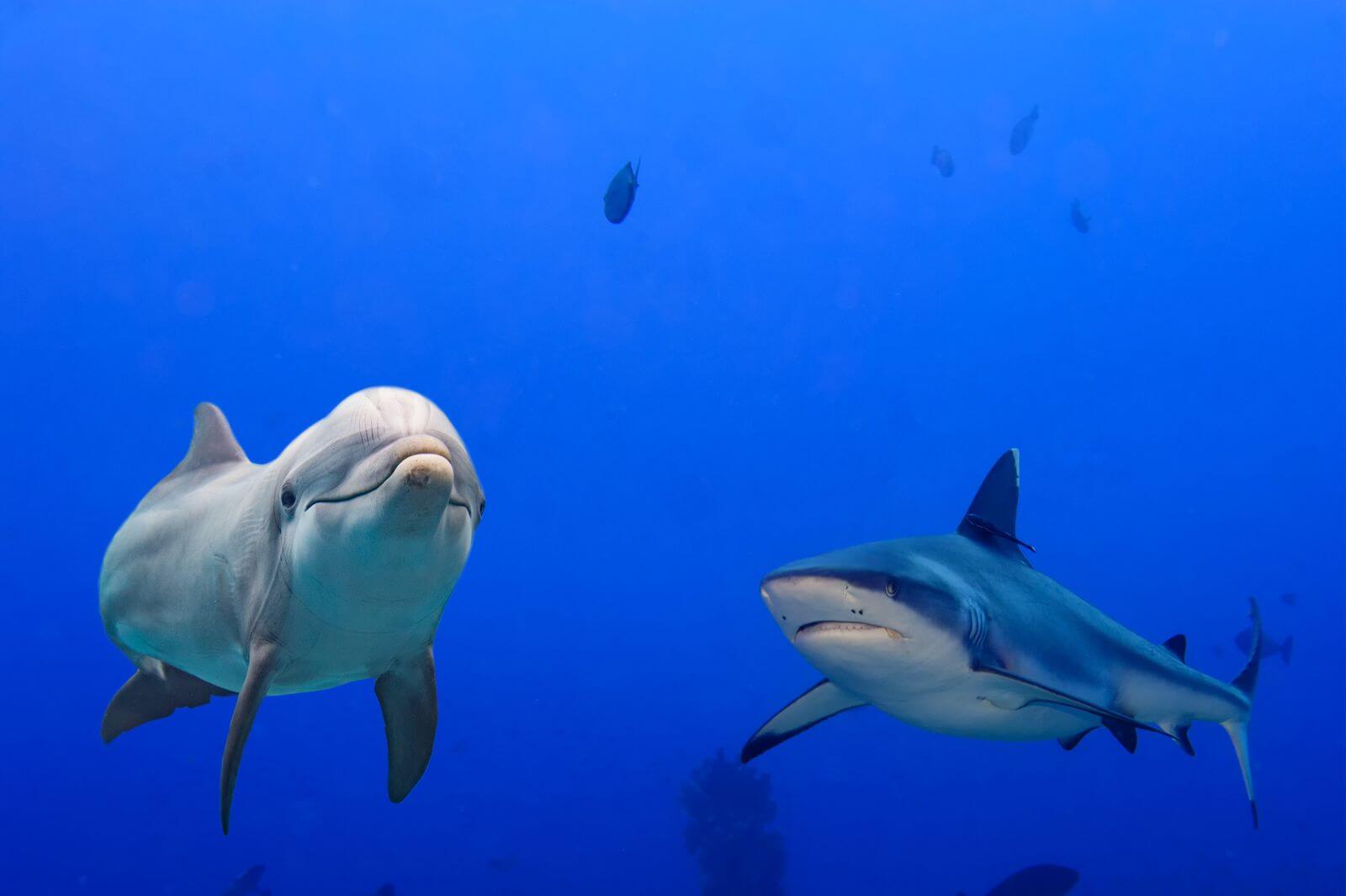 Two of the most common animals we think of when it comes to ocean animals are dolphins and sharks! There seems to be a constant competition between the two species when it comes to a variety of topics. Ranging from who is more intelligent to who would win in a fight! That’s why this week we want to make a determination with who is going to be a winner and loser of each popular debated topic. Who do you think it smarter? Who do you think would win a fight?

Did you know Dolphins are of similar intelligence as chimpanzees and dogs? They can solve complicated puzzles and work in situations well outside their natural instinct to hunt and kill. They communicate with each other and use complicated hunting and defense tactics to deal with their predators and prey. They are even known to use bait to lure creatures!

Sharks on the other hand, while generally are much more powerful, they are also much less intelligent. Because of their raw power, the majority of them don’t need to evolve an intelligence to be able to hunt or communicate. Great Whites and Manta Rays are among the most intelligent of the shark and ray species and are quite clever. But as far as we are aware based on what we know, are not on the same level that dolphins are.

To be more specific as we discuss the competition, let’s focus in on the Bottlenose Dolphin and Great White Shark.

The main advantage dolphins have against shark attacks is safety in numbers; they stick together in pods and defend one another from a shark’s attack by chasing and ramming it. Dolphins are able to protect vulnerable members of their pods and extended families such as young dolphins and injured or sick dolphins. Dolphins use their strong snouts as a powerful weapon to ram sharks, targeting their soft underbellies and gills to cause injuries.

Where do dolphins and sharks come from? How long have they been around? Who are they related to?

There are over 400 species of shark! The great white has some awesome relatives, like the tiger shark and bull shark. There’s also the whale shark, which, confusingly, is the largest non-whale animal in the world, weighing in over 40,000 lbs. and feeding on solely plankton. Shark species date back over 400 million years, and some modern shark species are over 100 million years old, making them older than dinosaurs (crazy I know)!

Bottlenose dolphins have some cool relatives, too. The Yangtze river dolphin, or baiji, mysteriously lives in the super-polluted Yangtze river in China and may be making a comeback after being previously thought as extinct. Spinner dolphins do amazing barrel rolls in mid-air. And the Amazon river dolphin are pink, that’s right PINK!

We have to give this one to the Sharks, I mean they are basically living dinosaurs!

Want to see just how intelligent and beautiful dolphins really are? Come see them up close on our Dolphin Quest tour! We’d love to have you.

PrevPreviousThe Guide on: How to Be an Arrrgmazing Pirate 101
NextCOVID-19 RE-OPENING UPDATENext
Feeling Adventurous? Check out our other cruises!