How Pirates Captured a Ship 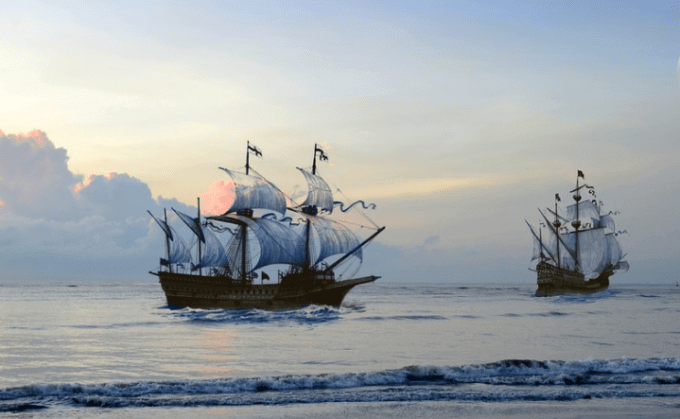 Ahoy mateys! Think it’s easy being a pirate? Think again! Back in the Golden Ages, when piracy was an actual career, pirates were faced with the challenge of capturing ships (or just the cargo on those ships) and was no simple task. In fact, the risk of going after a bigger and more powerful ship was so high, it often meant grave danger for the pirates themselves. Sounds scary, right? Here’s a little more info on how it all went down.

They Had to Choose the Right Target

In order to increase their chances of a successful attack, the pirates had to target the right pirate vessel. The ideal ship had several characteristics – a small crew, minimal firepower, lots of cargo, and was without a protective convoy or armed escort. How did they find these ships? The pirates scouted the less traveled sea lanes that were rarely patrolled by the navy.

They Used Strategy to Plan the Attack

For a successful attack, pirates must have a good strategy in place. Certain tactics they used included flying a friendly flag (fake, of course) that would entice the victim into a false sense of security or would prevent them from speeding up and getting away. The pirates would also pretend to be in distress in hopes the target ship would attempt to provide aid. Once the target ship was within firing range, the pirates would either raise their own flag or fire a warning shot – all with the intent to have the target ship surrender without a fight.

They Frightened their Victims into Submission

“Surrender or die,” was the grim and firm message given to the target ship upon the initial attack, and unless they were armed with a superior crew and firepower, that’s just what they did. Often the pirates would be bribed, and in fact, many ships even carried special cargo in case they encountered pirates.

They Captured the Ship

The next step was the capture! Fortunately, if the pirates were close enough to begin boarding, the merchant ship was unlikely to put up a fight. However, if the ship didn’t immediately surrender, the pirates would target the ship’s rigging and sails which would keep the ship from escaping.

They Would Take Prisoners

Once the target ship surrendered, the crew most likely would be taken prisoner, sold into slavery or killed, and any passengers would be sold or ransomed. The treatment of prisoners varied from ship to ship and depended on what the captain of the pirate ship wanted to do.

If the target ship was in good condition, the pirates would do one of several things – either take the cargo from the ship and send the ship out to sea (pirate translation: sink it), sell the captured ship, or add the ship to their own fleet.

Want to be a pirate for a day? Book your spot aboard The Pirate Ship Royal Conquest! For more information or to check availability, please call us at (727) 423-7824.