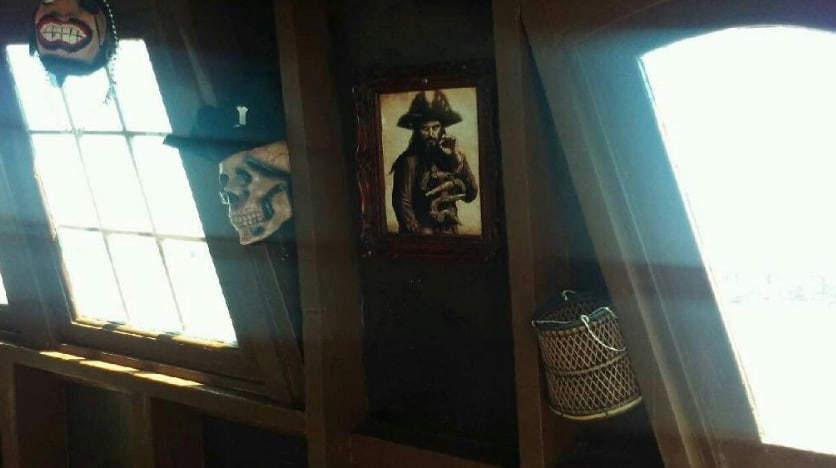 Ahoy mateys! We all love a good pirate-themed movie, and in no specific order, we’ve listed our top five favorites. Check it out..

Peter Pan (1953)
Peter Pan: “Tinker Bell! I hereby banish you forever.”
Wendy: “Please, not forever.”
Peter Pan: “Well, for a week then.”
It took Walt Disney over twenty years to buy the rights for this classic based on a 1904 novel by J.M. Barrie. Once it was in Disney’s hands, significant changes were made to the script to make it more child friendly like having the Darling children’s absence from the nursery go completely unnoticed by their parents. Another fun fact is that Peter Pan was the final Disney movie in which all nine members of Disney’s legendary Nine Old Men worked together as directing animators.

Swiss Family Robinson (1960)
Father Robinson: “Don’t you sometimes feel that this is the kind of life we were meant to live on this earth?”
This Disney classic about a settler family becoming shipwrecked on a remote island was based on a novel by Johann David Wyss. It’s an idyllic life on the island for the Robinson’s until a vicious gang of pirates enters the scene. Fun fact: In one scene, a trapped zebra is subjected to electric shock treatment to make it move around – a practice that is now illegal in Hollywood.

The Goonies (1985)
Mikey: “Goonies never say die!”
This awesome movie is about a misfit bunch of kids (including future stars Josh Brolin and Sean Astin) who find a treasure map that will lead them to the pirate booty once owned by One Eyed Willie and that is desperately needed to save their parent’s home from burdensome land developers. While in pursuit of gold, they come across criminals Mama Fratelli and her sons, who are hot on the Goonies’ trail – one filled with deadly booby traps, treacherous cliffs, and other unwelcome surprises.

Hook (1991)
Peter to Tinker Bell: “You’re a…you’re a complex Freudian hallucination having something to do with my mother and I don’t know why you have wings.”
Directed by Steven Spielberg, who once stated he had “never grown up”, Hook is a movie about a grown-up Peter Pan (Robin Williams) who forgot about his childhood and became a successful corporate lawyer. When Captain Hook (Dustin Hoffman) kidnaps his two children, Peter is forced to return to Neverland and reclaim his youthful spirit in order to defeat his nemesis.

Pirates of the Caribbean: The Curse of the Black Pearl (2003)
Jack Sparrow: “Savvy?”
Johnny Depp plays swash-buckling pirate Cap’n Jack Sparrow alongside Keith Richards’s drunken character who along with an all-star cast, kicked off one of the most successful franchises in movie history that was based on the popular ride at Walt Disney’s theme park. In this exciting and hilarious pirate-themed comedy, Jack Sparrow is out for revenge after being marooned on a desert island by his ex-first mate, Cap’n Barbossa (Geoffrey Rush).

To enjoy your very own pirate adventure, take a ride on the high seas aboard the pirate vessel, The Royal Conquest. For more information or to check availability, please give us a call at 727-423-7824.

PrevPreviousDolphins Social Network: Do They All Get Along?
NextClimate Change and its Devastating Effect on Coral ReefsNext
Feeling Adventurous? Check out our other cruises!