The Most Famous Pirate of All – Blackbeard

At one point or another, I’m sure we’ve all heard of the legend of Blackbeard. Sailing the seven seas upon one of the mightiest pirate ships to ever set sail. Blackbeard is one of most notorious pirates and sea robbers during the Golden Age of Piracy.

While Blackbeard has a notorious reputation among the “pirate community”, most of what we have been told is false and his legend is still unknown. Don’t worry, here aboard the Royal Conquest we know a thing or two about our fellow mateys! From his real name to his closet friends, we are ready to share some truth about Blackbeard with you.

While we all commonly know the famous pirate as “Blackbeard”. He was known across the pirate world as many names like Blackbeard Edward Thatch or Edward Teach. However his name was spelled in a variety of ways, including Thach, Thache, and Tack. With no surprise, his real name didn’t contain “Blackbeard” at all. It was actually Edward Thache Jr.

Blackbeard’s father moved the entire family to Jamaica, providing Blackbeard with enough education to be able to read and write and was later trained to be a mariner. Blackbeard’s given name was very respectable, like his upbringing. This is said to be why Blackbeard, like many pirates chose a different name and appearance to instill fear and terror among other sea dwellers. 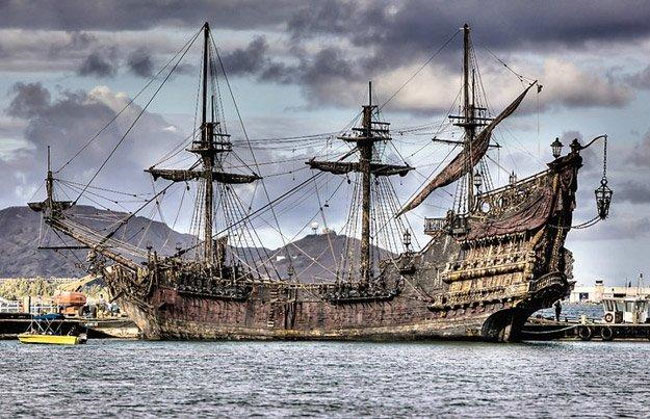 Oh, the beautiful “Queen Anne’s Revenge” was Blackbeard’s pride and glory. Blackbeard captured the vessel in November of 1717, when it was originally a large French slave vessel called La Concorde, which Blackbeard then renamed. The ship was originally a 200-ton vessel with 16 cannons and crew of 75. Blackbeard had to up the ante and added 40 more cannons on it launching the ship into pirate history.

Blackbeard preferred to intimidate his victims into surrendering, as fights were costly. For several months in 1717-18, Blackbeard used the Queen Anne’s Revenge to effectively terrorize shipping in the Atlantic. Between the massive frigate and his own fearsome appearance and reputation, Blackbeard’s victims rarely put up a fight and handed over their cargoes peacefully.

In 1996, a shipwreck believed to be Queen Anne’s Revenge was discovered off the coast of North Carolina. For many years, the ship and artifacts aboard were studied, including cannons, weapons, and the massive anchor. In 2011, it was officially confirmed as Queen Anne Revenge. If your ever in North Carolina, stop by the Maritime museum, where many of the artifacts are still on display.

Blackbeard or The Devil?

Lastly, while we know that Blackbeard changed his name to place fear onto fellow sea dwellers, he also put significance on his looks to do the same. His beard was said to be wild and unruly. It came up to his eyes and he even twisted pieces of colorful ribbon into it. He dressed in all black before a battle to signify the death of his opponent, strapped several pistols to his chest and put on a quite large captains’ hat. Probably not exactly what you envisioned, is it? Just wait it gets even a little stranger.

Blackbeard would put burning fuses into his hair and beard, leaving him constantly surround by a circle of smoke. To those he encountered it was said that he looked like the devil who had just stepped out of hell and onto a pirate ship. You could say using this tactic worked because most of his victims surrendered their cargo rather than fighting against him. Not only did Blackbeard avoid fights this way, but he could also easily keep their ship and avoid losing a high number of his men.

Want to learn more about pirates? Join us on a swashbuckling adventure aboard The Pirate Ship Royal Conquest! We tell pirate tales that are fun for all ages. Book your trip on our Tampa pirate ship today!