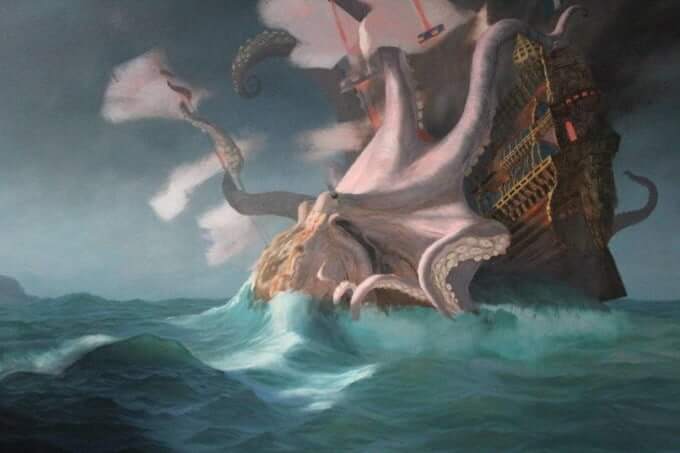 Come aboard the John’s Pass pirate ship to hear stories of pirate lore and fantastical experiences on the high seas! From Angola to Norway and across the oceans, the tale of this mystical sea creature struck fear in the hearts of even the most fearsome pirates. Tales spoke of a monster so big that it can be mistaken for an island! This octopus-like monster was said to attack sailing ships; it’s time to learn the pirate legend of the Kraken…the most famous sea monster of all time!

Rising from the waves to terrify sailors, the Kraken is a mythical creature with huge tentacles that would leave a dangerous, deadly whirlpool in its wake. For centuries, stories of the Kraken have been told in various cultures, and numerous sightings have been reported of what many people believe to have been the legendary kraken.

Pirates and sailors would tell stories of this many armed, monster that could reach the top of the ship’s main mast. Legend has it that the Kraken would haunt the seas of Scandinavia and harass vessels until they would capsize in order to eat the ship’s crew. If the Kraken were unable to capsize the boat by wrapping their arms around the hull, it would start swimming in circles to create a whirlpool around the ship, causing it to sink. The Kraken could even eat a ship’s crew in just one bite! Those who weren’t eaten by the sea creature would drown. Leaving none alive to share their story.

Many claim that the Kraken is the largest sea monster to have ever been imagined, and whether the story is true is still under great debate. However, over the course of hundreds of years, sailors claimed sightings of gigantic squids (some 40 to 50 feet long), which many thought to be the Kraken. Interestingly, the original tale of this massive beast is that, in fact, there were no tentacles and that the kraken more closely resembled a crab or whale.

Still don’t think it’s real? What’s truly amazing about the Kraken is that of all the pirate sea monster stories this one has the best evidence of being based in reality. King Syerre of Norway believed in the Kraken as he wrote in 1180 that the kraken was a large, squid-like monster. He would warn sailors of the many dangers of the sea, including massive sea monsters that would protect the shores of Norway. Then in 1752, a bishop published a (presumably non-fiction) book titled Natural History of Norway. The book included a section on sea monsters and the Kraken was described as “round, flat, and full of arms.” By the late 1800s, there were so many sightings that scientists began paying attention to the beast. Scientists believed the Architeuthis (a real-life Giant squid) inspired the tales of the Kraken.

Want to hear more pirate lore? Join us aboard the Pirate Ship Royal Conquest and hear swashbuckling stories for all ages! We have yet to see the mighty Kraken, and we hope to never run into this famous creature in the bay. For more information on our John’s Pass boat tour or to check availability, please call us at 727-423-7824.