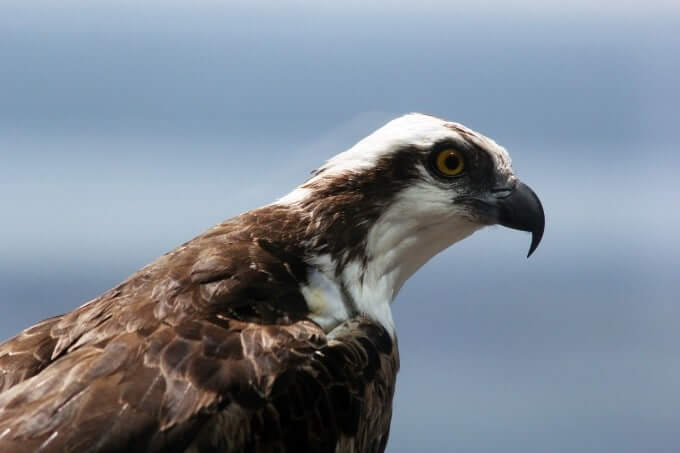 While traveling along picturesque Boca Ciega Bay on our sight-seeing dolphin cruise, not only will you experience the thrill of witnessing marine life in its natural habitat, but Florida wildlife as well. One these incredible creatures that soars through the skies and contributes to life on the bay is the osprey – a large bird of prey, aka “sea hawk”, “river hawk”, and “fish hawk”.

Appearance
Considered a large raptor, osprey can reach more than 24 inches in length with a wingspan of 71 inches! The upperparts are a deep, glossy brown while the breast is white (sometimes streaked with brown), and the underparts are pure white. The head is white with a dark mask across the eyes, reaching to the sides of the neck. The irises of the eyes are golden to brown, the bill is black with a blue cere, and the feet are white with black talons. Osprey have a short tail and long, narrow wings with four long, finger-like feathers, and a shorter fifth wing that gives it an unusual appearance. Weights range anywhere between 2 to 4.6 pounds – pretty lightweight for such a large bird! Adult males have a slimmer body and narrower wings than their female counterparts, and cute young osprey have streaked feathers on the head, buff fringes to the plumage of the upperparts, and a buff tone to the underparts. When you see osprey soaring through the skies, you’ll notice the arched wings and drooping “hands” that give it a gull-like appearance.

Diet & Behavior
As its nicknames suggest, osprey almost exclusively eat fish but will also prey on rodents, rabbits, and small reptiles on very rare occasions. The fish they prefer to eat weigh five to ten ounces and are ten to fourteen inches in length. Ospreys have excellent vision that helps detect underwater objects from the air. Prey are typically spotted from a range of 33 to 131 feet above the water, after which osprey hover for a bit, and then attack with their feet first into the water. The normal call of osprey is a series of sharp whistles, unless there is unwanted activity near their nest. In this case, their call is quick, frenzied, and erratic.

Habitat
Ospreys can tolerate a wide variety of habitats. As long as there is a large body of water with plenty of food, that’s where you’ll find osprey nesting (except for Antarctica – the only continent on Earth where there are no osprey).

Interested in seeing osprey and other wildlife in their natural habitat? Give us a call at (727) 392-7090 for information on our dolphin sight-seeing cruise that takes off from John’s Pass in Madeira Beach and sails through Boca Ciega Bay. It’s an experience of a lifetime!