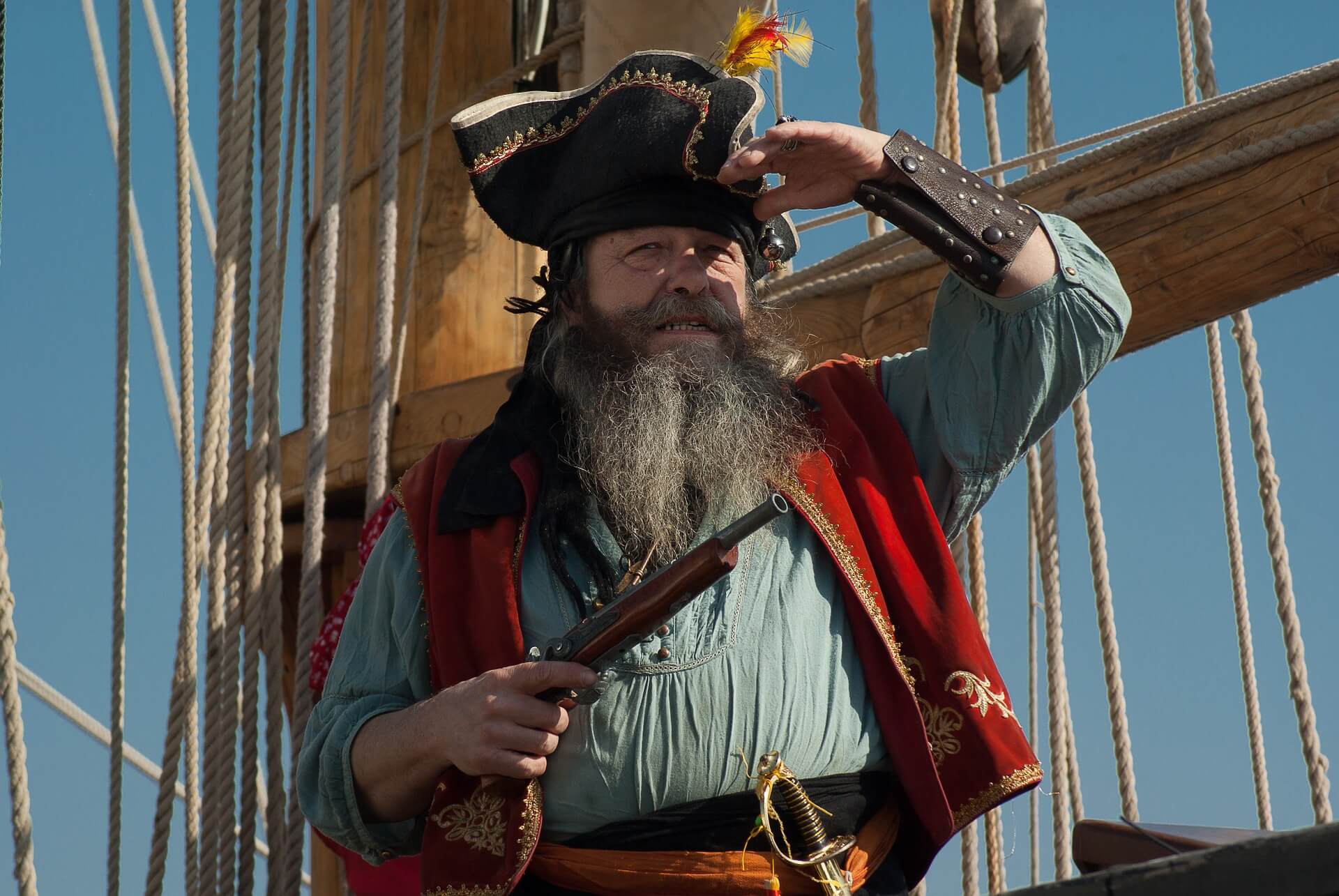 To be a pirate, ye must talk like a pirate!  So before you set sail, you better brush up on your pirate lingo.  Here are a few pirate phrases that will keep you from walking the plank!

Ahoy: “Hello” or used as an interjection to attract attention or to hail a ship or a person.

Aye: Yes or an affirmation.

Becalmed:  The state of a vessel that can not set sail due to lack of wind.

Bilged on her anchor:  A ship pierced by its own anchor.

Black Spot: A black smudge on a piece of paper, typically representing a death threat.

Blimey!: An exclamation of surprise.

Chase: A ship that is being pursued.

Code of Conduct: The set of rules that pirates must obey while on the ship.

Come About: To turn the ship completely in the wind.

Davy Jones’ Locker: A fictional place at the bottom of the ocean that most often means death.  The legend of Davy Jones is that he sank every ship he took and created a watery grave for all pirates aboard these ships.  “To die at sea is to go to Davy Jones’ Locker.”

Fire in the hole: The warning before a cannon is fired.

Give no quarter: The refusal to spare the lives of the enemy.

Grog Blossom: The redness on one’s nose caused by drinking too much alcohol.

Hang the jib: To put or frown.

Hornswaggle: The act of cheating.

Loaded to the gunwalls: To be drunk.

Marooned: To be stranded, typically on a desert island.

Mutiny: The act of rising against authority, typically the captain of the ship

Overhaul: To either slacken a line or to gain upon a chase and overtake another ship.

Piracy: The act of robbery at sea.

Plunder: To steal one’s booty or to rob.

Reef Sails: Partially tying the sails to shorten them with the intent to slow down the ship or to keep a strong wind from putting too much strain on the masts.

Rope’s end: Term for being flogged.

Run a rig: Play a trick.

Sail ho!: An exclamation that another ship is in view.

Sea legs: Adjusting one’s balance to the motion of a ship, especially in rough seas.

Shiver me timbers!: An expression of surprise and strong emotion.

Swab: To clean the ship or a disrespectful term for a pirate.

Walk the plank: The act of being forced off a ship by pirates as punishment or a form of torture.

Talk Like a Pirate on our Tampa Pirate Ship

On the Royal Conquest, you’ll hear all sorts of pirate lingo and lore (like the tale of the Kraken). Join us for a day of fun on the water. Book your tour of Johns Pass and Madiera Beach, FL today!

PrevPreviousThings To Do in Tampa Bay: The Royal Conquest Pirate Adventure
NextHow to Make the Most of Your Dolphin Watching ExperienceNext
Feeling Adventurous? Check out our other cruises!